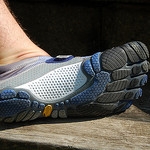 There is a recent trend in the running community towards minimal shoes. Minimal shoes, including toe shoes such as FiveFingers, are made with lightweight material and have less cushion and arch support than older models of running shoes. There are many claims that minimal shoes offer advantages in terms of injury prevention and performance.

Wearing minimal footwear is meant to emulate barefoot running. Theoretically, running barefoot or with minimal shoes enforces a midfoot or forefoot strike, reducing the impact forces over the lower extremity. Lower impact forces should lead to lower rates of injury over time. The downside is that there is more stress to the calf, Achilles tendon, and plantar fascia. The increased stress to these different locations could lead to new injury patterns.

One way in which minimal shoes affect running economy and efficiency is the weight of shoes. Studies suggest that adding mass to shoes increases the rate of oxygen uptake (VO2) by approximately 1% per 100 g per shoe. This means that the heavier your shoe is, the harder you need to work. Researchers at the Locomotion Lab at University of Colorado, Boulder demonstrated that increasing the weight of the shoe did increase the required effort, but that running barefoot offered no metabolic advantage over running in lightweight shoes. Another study, published in Medicine & Science in Sports & Exercise by the Department of Human Evolution at Harvard, showed that running in minimal shoes is modestly more economical than running in traditional shoes.

The evidence suggests that running with minimal shoes can help change your running style to midfoot or forefoot running; and demonstrates that minimal shoes improve running economy slightly compared to traditional shoes/

Minimal shoes may provide a modest benefit to running efficiency over traditional shoes.