Over Hydration and Hyponatremia 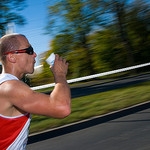 Part 2 of a 3 part hydration series

How can I prevent exercise associated hyponatremia?

Exercise associated hyponatremia was first documented in the 80’s by Noakes and colleagues, and was called “water intoxication”. Hyponatremia means low (hypo) sodium (natre) in the blood (mia). Specifically a blood sodium concentration below 135 mEq/L defines hyponatremia (O’Connor 2006 and Rosner 2007). Sodium is an important electrolyte that is lost through sweat. Excessive sodium loss can also result from vomiting, diarrhea, or in individuals with cystic fibrosis (Sawka 2007).

Hyponatremia is a major concern for endurance athletes competing in long events, and can be fatal in extreme cases. A study conducted during the 2002 Boston Marathon, obtained blood samples from 64% of the runners and found that 13% of them were hyponatremic at the end of the race. The researchers found certain variables that were statistically associated with developing hyponatremia, including: weight gain during the race, race time longer than 4 hours, consumption of more than 3 liters of fluids, consumption of fluids at every mile, female gender, and low BMI (Almond, 2005). Other researchers have noted other risk factors including pre-exercise over-hydration, drinking more than 1.5 liters per hour during the event, abundant drinks provided at the event, extreme environments (both hot and cold), and a possible association with use of non-steriodal anti-inflammatory drugs (Rosner and Kirven, 2007).

The average concentration of sodium in sweat is 25-75 mEq/L (O’Connor, 2006). Although a blood level below 135 mEq/L defines hyponatremia, most athletes do not become symptomatic until the blood sodium concentration drops below 125 mEq/L. Weight change during exercise is primarily due to fluid changes in the body, and as stated above, is associated with hyponatremia. Athletes who lose weight during exercise tend to be mildly hyponatremic, and asymptomatic. Alternatively, symptomatic hyponatremia with blood levels below 125 mEq/L is associated with weight gain or no change in weight, due to drinking in excess of sweat losses (O’Connor 2006). Symptoms of hyponatremia include headache, nausea, vomiting, light headedness, dizziness, swollen hands or feet, restlessness, unexpected fatigue, confusion, disorientation, incoordination, wheezy breathing, seizure, coma, and potentially death (O’Connor 2006 and Sawka 2007).

Since there is no way to determine individual sodium losses outside of a lab, multiple researchers have tried to develop sodium intake recommendations. Kenefick and Cheuvront propose that the average American diet contains sufficient amounts of sodium to avoid needing to supplement sodium in most cases. On the other hand, the Institute of Medicine and ACSM have provided guidelines for the recommended amounts of electrolytes and carbohydrates in sports beverages (Sawka 2007 and Rosner 2007). However, multiple studies have not shown that sports beverages or sodium supplementation have a protective effect against hyponatremia. It is reasonable to assume that drinking sodium containing beverages versus plain water may lead to less severe hyponatremia, but over hydrating with either sports beverages or water is a major risk factor for developing exercise associated hyponatremia (Rosner and Kirven, 2007).

Drinking more than the amount that you sweat may lead to hyponatremia.